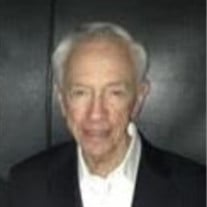 Albert Levin, age 93, of Edina, died unexpectedly on Wednesday, September 29, 2021. Albert was preceded in death by parents Rae and Abraham I. Levin; son-in-law Alan M. Shapiro; sister and brother-in-law Millicent (Robert) Sukman; parents-in-law Rachel and Maurice Lotterman; and sister-in-law & brother-in-law Sylvia (Arnold) Goldman. He is survived by his wife of almost 72 years, Jeanne; children, Steven (Mimi) Levin and Carol Shapiro; grandchildren, Scott (Michelle) Shapiro; Lauren Levin (fiancé Chelsea Cimilucca); Mark Shapiro; Andrew (Carly) Levin; and Stacy (Sarah) Shapiro; great-grandchildren Alexia, Adrian, Liv, Willow and Blake. Albert graduated from the St. Paul College of Law and practiced law in St. Paul with his father until his father’s death and then with his law partner, Kenneth Rohleder. Albert served on the Board of Directors of Commercial State Bank for 24 years and in his role examined titles to approximately 2000 parcels of real estate and handled many of the bank’s foreclosures. Albert also served on the Board of Trustees at Mount Zion Temple. Until recently, Albert helped manage and oversee legal matters for several residential and commercial properties in which he was an owner. Al met his bride, Jeanne, in 9th grade Spanish class and was madly in love with her until the end. They loved their time together, eating out, seeing movies, shopping, travel and were avid art collectors. But best of all was spending time with their grandchildren. Al led by example always with a source of joy, love and humor. He will be remembered for being the epitome of a true and trusted gentleman. Many thanks to the staff at Breck Homes, Aurora Assisted Living Community and all the wonderful caregivers during the past few years. Funeral service 1:00pm SUNDAY, October 3, at TEMPLE ISRAEL, 2323 Fremont Avenue South, Minneapolis. SHIVA will take place at Oak Ridge Country Club upper parking lot at 5:30pm weather permitting. We ask that masks and Social Distancing guidelines are followed for the funeral service and Shiva. Funeral service and Shiva will be available on Zoom. Email [email protected] for link. In lieu of flowers, memorials are preferred to the Alzheimer’s Association or the Jeanne and Albert Levin Family Fund at JFCS.

The family of Albert D. Levin created this Life Tributes page to make it easy to share your memories.